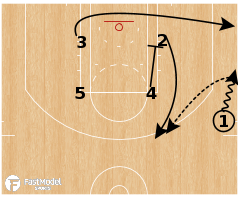 2 makes a zipper cut off of 4 and receives the pass from 1. 3 runs through to the ball side corner. With the left side of the floor cleared, 5 sets a screen for 2. 2 and 5 play a two person pick and roll game. See More

Another Sideline Out of Bounds (SLOB) play Nick Nurse introduced in his first season as the Head Coach for the Toronto Raptors is one which uses the same formation as SLOB "1". Through misdirection to make the defense believe "1" is being run, the Raptors have caught defenses by surprise quite frequently before engaging in a middle ball screen after a dribble handoff (DHO). This is typically a set play used to get Kawhi Leonard a possession as a pick and roll ball handler. Free Download: Toronto Raptors Playbook See More

The Toronto Raptors' most frequently used Sideline Out of Bounds (SLOB) play in 2018-19 forces the defense to move laterally before being put in position to defend a "Stack" ball screen. SLOB "1" features a Slice cut and Mover-Blocker principles before a high pick and roll to attack the defense downhill. SLOB "3" is a counter. Free Download: Toronto Raptors Playbook See More

Pick and Roll Offense: "The Other 3"

During the past decade, especially after the 2006 FIBA world championship, the pick and roll offense was given a newfound level of attention. The avenues with which you can go down when discussing the pick and roll are endless (angles, spacing, player development, proper defensive technique). Here are the common options which the other three players outside of the PNR action can be involved in. There are definitely more options for the “other 3” but these are the most common approaches teams use today. See More

This is the progression we use to prepare our players to be successful in running different PNR actions all over the court. We work on a combination of these actions every single day in order to get our players making quick and efficient reads in games. Click here for more #PlayerDevelopmentWeek content! See More

The Toronto Raptors have followed the league-wide trend of introducing stack pick and rolls into their offensive playbook over the past two seasons. It leverages their best players' top skills, as their backcourt is tremendous in pick and roll scenarios, while Kyle Lowry in particular is a tremendous screener for his size. Dwayne Casey has implimented the use of stack pick and rolls by toying around with how the action is initiated, but has recently settled on going 4 flat along the baseline before lifting the screeners for the high ball screen. See More

Here is a simple action that Virginia Union WBB usesto get their All-American point guard to the rim or get a 3pt shot for a 40%+ shooter. The big/big staggered should eliminate any switches on the shooter. See More

This drill is from Coach Don Showalter, head coach of the USA U16 team. This drill puts players in game-like pick & roll situations and gets shots for 3 players on each repetition. See More

Here is a NBA Golden State Warriors Dribble Hand-Off / Pick and Roll Action from Game 3 of the NBA Western Conference Finals. Steve Kerr is doing an excellent job in getting great motion and action into his set plays for their players. The Golden State Warriors are the team that I want to watch in the NBA Play-offs for my new sets. Steve Kerry has installed a system that is like the NBA San Antonio Spurs in it's movement, flow and creativity. The starters and reserves have bought into this system all season. David Lee is even getting a second chance in these NBA Playoffs. He is seizing the moment too. Stephy Curry and Klay Thompson are indeed the Splash Brothers and either of them can go off for 20 points in a quarter at any moment. Curry is the MVP, but Thompson is likely to go off on any night. They were one of the best teams ever in the regular season, despite the trip up from the always difficult Memphis Grizzlies. I love this action and you will notice that I chose a play where Steph Curry isn't in the game. It's an example of how their reserves have bought in. If you want to see more basketball plays like this one then check out: http://www.mensbasketballhoopscoop.com/ See More

Cincinnati ran this set multiple times against Purdue. Cincinnati ran this down by 4 with 8:58 remaining in the second half, their point guard penetrated off the side ball screen and pitched to the shooting guard for a catch and shoot rhythm 3 pointer. Cincinnati ended up winning this game to advance to the third round. See More

This double screen was run by the Los Angeles Lakers in the second half of their 118-116 win over the Golden State Warrios 4/12/13. It allows your ballhandler to drive the right side of the court with an unprotected basket and if cut off reverse the ball to a big for a hi-lo pass. See More

Player feeds the post by stepping and passing around the chair (#). Player then uses a bump cut to receive the ball back. Player then uses the chair as a screen and reads the coaches hedge to attack into a pick and roll score. Hard Hedge= Attack Soft Hedge=Split the screen See More

Today's Basketball Play from Men's Basketball HoopScoop is a University of Kentucky High Pick and Roll. This pick and roll will give you the opportunity to spread out the floor for your point guard. See More 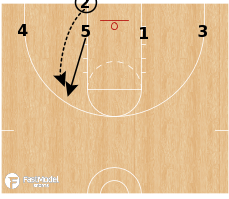 This is a great play to get a wide open corner three, a mismatch in the post, or some pick and roll action. The 5 flares out and recieves the pass from inbounder. The 4 sets a screen for the inbounder who flashes out to the corner. Option #1 is a wide open 3 from the inbounder (2). Option #2 is the 4. After screening for 2, 4 turns and seals on the strong side block. If no options are there the 5 swings to the ball to the point guard and sprints to set an on ball screen. The point guard has many different options coming off of that ball screen to the opposite side of the floor. This is an extremely simple, but very effective BLOB play that provides a variety of actions to score! See More