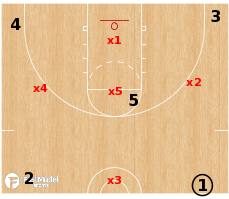 Keeper (X3) - We try to put a player that has great length and has a nose for the basketball. Often times this may be your tallest guard or a more athletic post player. The keeper's main responsibility is to make ball reversal difficult and to "keep" the ball on one side of the floor as much as possible. The keeper should also lead your team in rebounds due to the fact they have great positioning to read the flight shots from the corners and wings. Pushers (X4 and X2) - By far the most important position in this defense due to the demands we place on them. We usually put our best rebounding guard/post on the left side of the floor (X4) due to the high volume of shots taken from right side of the floor. We want our best athlete (our Michael Jordan) to be the right side pusher (X2) in our initial set up. We like having an undersized guard on the right side so they can pressure the initial entry pass, possible trap the dribbler at half court, and steal skip passes from the left baseline corner. Clogger (X5) - The clogger is usually your tallest post player or a physical guard if you have a small team. The clogger must do several things well to be successful. First and most important is to keep the ball off the high post. Second, they must always have high hands to aid in distorting diagonal passes to the block area. Finally, they must attack dribble penetration at 3pt line and keep ball out of the paint. Warrior (X1) - The warrior is usually our point guard but any guard can play this position. The warrior must always be in line vertically with the basketball. They must not allow anyone to screen them or pin them in at any time. They must cover corner to corner so someone with speed, quickness and great instincts works well in this position. Before looking at coverages and slides in the 1-3-1, we must first talk about the most important concept when playing this defense or any zone defense. Our players positioning is always in relationship to where the basketball is regardless of offensive alignment. In part 1 of our player positioning, you can see the basic slides and coverages when the offense passes guard to guard. See More 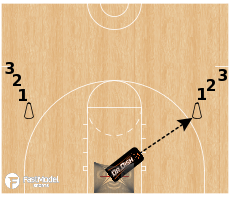 Read and React Circle Movement using the Dr. Dish. Anywhere from 4 players to your entire team can use this drill to simulate game like conditions and drill habits without the hassle and chaos of rebounding multiple balls. Great if you have limited space, time, or just want something different. See More 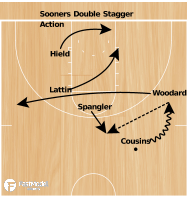 Head Coach Lon Kruger has a gem in Buddy Hield this year and his line-up is also fortunate enough to have good Senior leadership. The Sooners are 2nd in the nation in 3 pt shooting % at .426 (10.5 makes per game behind the arc) Isaiah Cousins a versatile guard who can both shoot and handle the ball, Hield (2nd in the nation in scoring at 25.4 ppg), and Ryan Spangler one of the hardest working big men in the nation (top 50 in rebounding at 9.5 rpg.) This double stagger action was run against Kansas to get Hield a look. Hield reads the defense perfectly, cuts up the gut and as the help defender runs at him, he makes the perfect extra pass to Woodard in the corner for the open 3 pt shot. The Sooners have been fun to watch this season and as we head into the BIG 12 & NCAA Tournament, it will be interesting to see how far they can go. See More 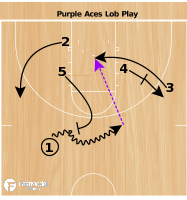 Evansville Purple Aces Lob Play Head Coach Marty Simmons has two of the most exciting players in the country in D.J. Balentine (#20 in the nation in scoring at 20.7 ppg) and Egidijus Mockevicius (#1 in the country in rebounding 14.0 rpg). When you are looking to add some good set plays, the Missouri Valley Conference is the place to look. This Lob Play is a quick hitter that requires solid timing and good reads. The screening action off the lane cut and the cut from the big off the TOK require good eye contact with the passer. Nobody wants to have to face a team from the MVC in the NCAA Tournament as they have a history for being "Cindarella" at the Dance! See More 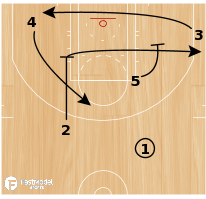 Portland Trailblazers ran this play in game 2 of the Portland-Memphis series. With Lillard's speed and Portland's execution of spacing and screening, Lillard gets a clear drive to the rim. If Lillard decides to shoot the ball of the high ball screen, Robin Lopez (5) has great rebounding position. See More 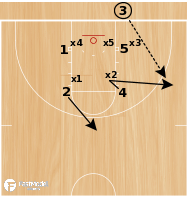 We had a chance this year to pull one of the bigger upsets in the Horizon League as we were leading Green Bay by ten points with under eight minutes to play. Green Bay ended up the season as the 2 seed in the conference tournament, and plays UIC tonight in the Horizon League Tournament Semi-Finals on ESPNU. Their PG #24 Keifer Sykes is their star player and has won league Player of the Year the past two seasons. Coming out of the media timeout down ten they ran this BLOB against us to get them back into the game and set up their press & 3-2 zone defense. They screened the bottom man of the zone so he couldn’t follow Sykes up to the elbow, and drifted their best shooter #12 Love to the far wing. When Sykes caught the ball it accounted for both of the defensive guards. He quickly reversed the ball to #12 Love and our top guard defender and bottom wing defender had to scramble to close out. The 5 on the reversal pass turns and seals the defensive center for an entry pass or rebounding position. This in my opinion gave them life, and was one of the biggest reasons they came back and beat us by 1. See More 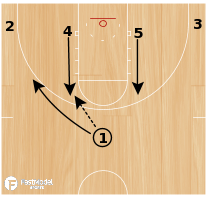 Green Bay needed a score in a huge Horizon League contest down 1 against Valpo. They used pre-season POY #24 Keifer Sykes as a decoy to free up their second best player in Greg Mays. Ball was entered to Mays who received a 5 man ball screen so he could drive it hard to his right hand. With him putting so much pressure on the defense with the drive, it allowed the 5 man great rebounding position if he would have missed the shot. See More 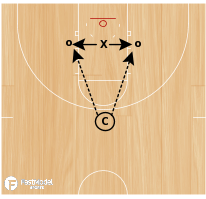 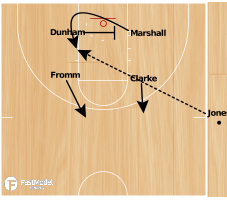 This is the SLOB ran last night by Brad Stevens and Butler down 70-67 against Marquette with .13 to play. The play used great misdirection in getting Clarke a clean look at a 3 which bounced off, but because of the great weak side rebounding position by Butler, they were able to tap in the rebound cutting the lead to 70-69. A very well designed set by from a timeout situation by the Butler Bulldogs and their great young Coach Brad Stevens. See More 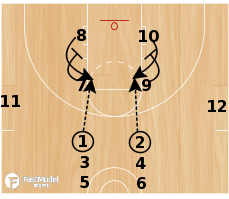 This is a drill I've used as a pre-game warm-up because you can get up to 14 players moving! It includes screens, passing, shooting, rebounding, & dribbling. You can change the screens to fit your offense. See More

Every Coach will tell you the importance of winning 50/50 balls. Most of us spend some time on rebounding technique but when it comes to loose balls we just expect our players to just "want it more than they do." While effort is a major part, this drill allows you to teach how to get more of those balls. See More 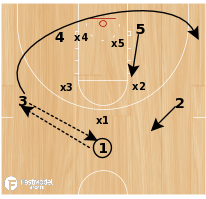 Louisville used today's FastDraw Play of the Day against the Syracuse zone to get a 3 after passing on a high-low option. The action put a weakside rebounder in great position to clean up the glass as shown in the video below, reminding us that sometimes the best offense against a good zone lies in transition and offensive rebounding: See More

Here are 5 of my favorite shooting drills that I like to use in workouts with my players. They are challenging, competitive, and fun helping players become more efficient shooters. Try them out! Click here for more player development drills from Mike Shaughnessy Mike Shaughnessy x FastModel Sports - Twitter Takeover See More 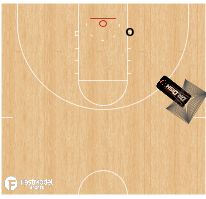 This drill is designed to simulate the Push Stagger set run by Stephen F. Austin during the 2015-2016 season. Settings: Location (17, 3), Tempo (6) Setup: One player at the block. See More 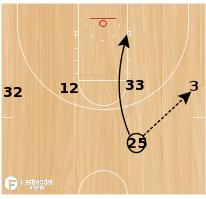 This set was executed by Mercyhurst WBB vs. Clarion University of PA in PSAC action on 12/19/15. There are post up opportunities for the point guard and post position in this set. https://www.youtube.com/watch?v=B_5TQzgCSn8 See More