Andy Endfield has a lot of coaching influences, one of them being Rick Pitino and not only does he do a good job with their match-up zone and changing defensive looks, but also on the offense end being able to open the floor and use spacing properly to get players good looks to score. Here is a good high PNR action looking to hit the post man rolling in the lane See More 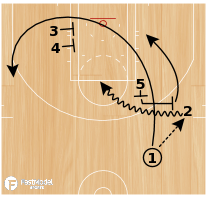 The Chicago Bulls ran this action Saturday evening versus the Brooklyn Nets in Game 1 of the 2013 NBA Playoffs. This is an excellent play that makes it harder to help and tag on the pick & roll because the defense has to respect Hinrich (1) coming off the double screen on the weak side. See More 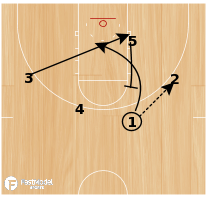 A set the Bulls ran in game 1 vs the Nets. Ucla/BS is a very common action and this is a really nice action to add as a counter. See More 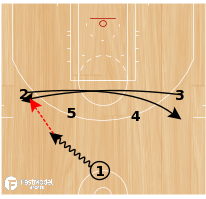 The Chicago Bulls ran this set play in the 1st Round of the NBA Playoffs. See More 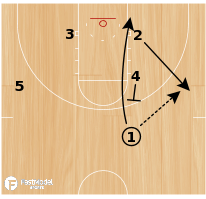 Basic UCLA entry and ball reversal to 4 . On reversal to 3, look for possible slip to basket by 5 on down screen. 5 steps to corner, setting up back screen and lob to 4. Give it a try! See More 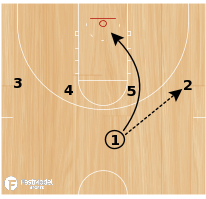 This can be run as a play to end the half, game, or to get an open three anytime. 1 makes UCLA cut to the basket. He stops inside the block and cuts up the middle of the floor to catch and shoot a three. 3 and 5 set double screens and "close the door" and free him for a shot. Give it a try! See More 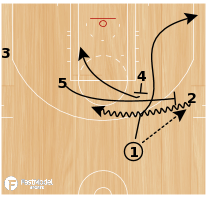 The Denver Nuggets ran this UCLA into a PIck & Roll action during Game 6 of the NBA Playoffs in their loss to the Golden State Warriors. What made this play so effective is Faried got a piece of Koufos' man on the roll which made Koufos' man late to help on the pick & roll. See More 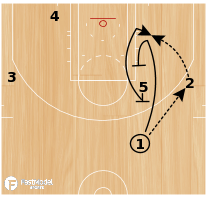 The Chicago Bulls ran this simple post-up play to get Carlos Boozer two points on the block in Game 1 versus the Miami Heat. This is a play that the Bulls run almost religiously every night and have several different ways to get into it. Here another way they ran this play a few weeks ago that ended in a pick & roll. Because Boozer is such a force inside due to his size and strength this is a very difficult action to guard. If X1 switches with X5 its more than likely an immediate score and if X1 holds until X5 recovers 1 will be open for a shot popping out. See More 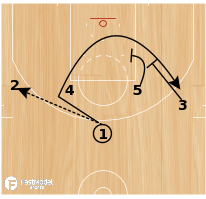 OKC ran this set midway through the third quarter of game 2. At this point Durant had only taken 9 shots. He had the ball in his hands a lot and was facilitating for his teamates. This was a great set to get him a touch with the ball out of his hands. After he hit this shot he got it rolling to finish out the quarter. The UCLA Ball Screen-Stagger is a common set with a lot of options, many of which are posted on FastModel. Reversing the ball back to a shooter coming off a pin down is a great option. See More 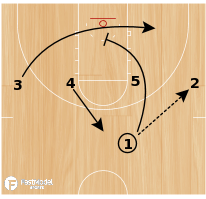 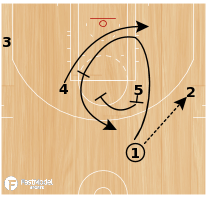 The Indiana Pacers ran this UCLA set in Game 2 of the Eastern Conference Finals versus the Miami Heat. This play gives three scoring options in the UCLA cut, the post up, and the down-screen. The Miami Heat did a very good job guarding this action so the Pacers ended up running a middle ballscreen late in the clock. See More

Here is the best stuff from the San Antonio Spurs in their 4-0 series sweep over the Memphis Grizzlies in the Western Conference Finals. There are quite a few plays as I wanted to be able to give you the Spurs playbook of their most successful actions and offensive sets. To best enjoy and learn from these play diagrams I recommend that you watch the video which is linked below as all of the diagrams are listed in order with the video clips. See More

The Indiana Pacers ran this set a few times in the ECF against the Miami Heat. They utilized mis-direction against an aggressive Heat defense to keep Miami on their toes. Following the UCLA screen and flex screen the 1 man then turns right back around to get the 3, letting #24 Paul George run off a stagger screen. This brought the 1 off a down screen and gave him the ball back in a better scoring area for him to create. See More 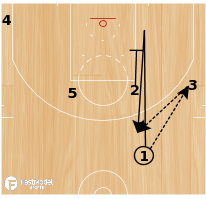 Set run by Miami at the 9:35 mark of Q3 in their game 5 loss to the Spurs. It's a mid ball screen that ends up with a post feed for Wade. See More